To Purchase Tickets On-line, click here • or on upper right column on GreeneDems.org. 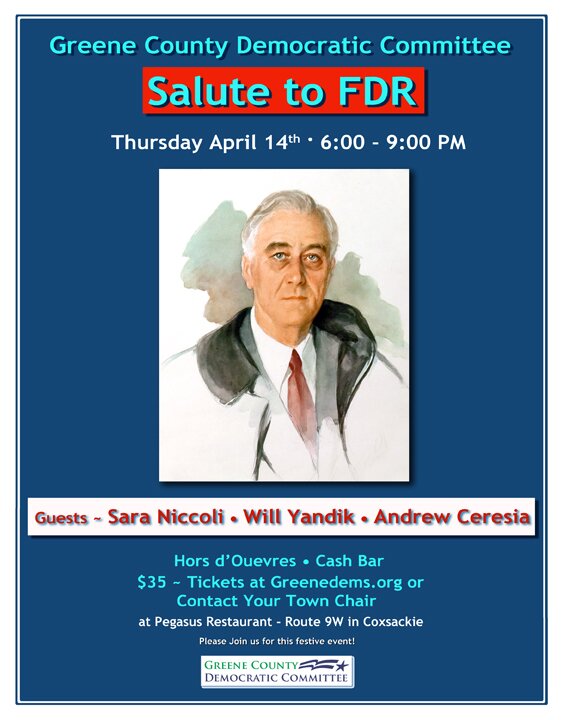 Sara Niccoli ~ With 15 years of experience in government and non-profit administration, Sara has raised millions in federal and state grant revenue and managed complex budgets with efficiency and integrity. Sara holds a Master of Public Administration from NYU’s Robert F. Wagner Graduate school of Public Service.  Sara and her husband, Sean Mallinson, operate a small second-generation family farm in the Town of Palatine.  Sara is a mother, family farmer, and Palatine Town Supervisor. She understands that the problems we face in our community are simply a failure of leadership. Sara will fight for quality public education, good jobs, fair taxation, and an end to government corruption. Sara’s road to public office is the road to a better quality of life for the people of Senate District 46.

Will Yandik is a fourth-generation family farmer, and was born and raised in the Hudson Valley. He graduated from Princeton, and earned a master’s degree from Brown University before advocating for historical preservation, and writing environmental policy guidelines. He returned home to Columbia County to manage the family farm and bakery, while also teaching biology at Columbia -Greene Community College. Will has been a leader in the Hudson Valley Smart Energy Coalition and is the first-ever Democrat to become Deputy Town Supervisor in Livingston.

Zephyr Teachout is an American academic and activist. She is an Associate Professor of Law at Fordham University, and previously a Visiting Professor of Law at Duke University and a lecturer at the University of Vermont, and an author. In 2014, she ran for the Democratic Party nomination for Governor of New York, losing to incumbent Governor Andrew Cuomo. In July 2015, she was named as CEO and Board chair for the US-based anti-corruption nonprofit Mayday PAC, replacing Lawrence Lessig.  Teachout is an antitrust and media expert who served as the Director of Internet Organizing for the 2004 Howard Dean presidential campaign. She cofounded A New Way Forward, an organization built to break up the power of big banks, and was involved with Occupy Wall Street.  Teachout was also the first national director of the Sunlight Foundation. Unfortunately she will not be able to attend the FDR event because she teaches on Thursday nights.

Andrew Ceresia  is a resident of Wynantskill in Rensselaer County. He is seeking election to the NYS Supreme Court in the November election and is currently an acting Supreme Court Justice in the Third Judicial District.  He has a long career in the judiciary as a Rensselaer County Judge where he currently serves since 2009. He is a graduate of Albany Law School and prior to his judicial experience  he served as Appellate Court Attorney, New York State Supreme Court, Appellate Division, Third Department from 1998 – 1999 and again from 2005 – 2009.